The method was inspired by a doctor’s memory of opening a wine bottle without a corkscrew. 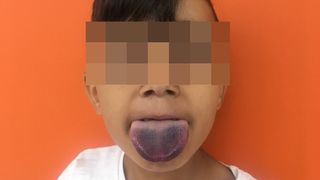 When a 7-year-old boy in Germany got his tongue stuck in the neck of a juice bottle, doctors used an ingenious method to get it out. Above, a photo of the boy after his tongue was freed from the bottle. His tongue was “lividly discolored” for several days due to damage to the tongue’s capillaries.
(Image: © The European Journal of Anaesthesiology)

When a boy’s tongue became stuck in  the neck of a juice bottle, a doctor had a clever idea on how to get it unstuck that was inspired by his memory of opening a wine bottle without a corkscrew.

The simple solution — an injection of air into the bottle —  worked to free the child’s tongue without the need to cut the bottle or give the boy general anesthesia, according to a new report of the case published today (Oct. 31) in the European Journal of Anaesthesiology.

The use of this “positive-pressure” method “proved to be a simple, effective and safe technique for releasing a tongue entrapped in a bottle,” study lead author Dr. Christoph Eich, of the Department of Anaesthesia at Auf der Bult Children’s Hospital in Hannover, Germany, said in a statement. “We would suggest trying this method before more invasive procedures under general anesthesia are considered.”

The 7-year-old boy had been licking the inside of the juice bottle to try to get the last drops of juice, the authors said. But suddenly, the boy’s tongue became stuck. His mother tried to remove it by pulling and twisting the bottle, but to no avail. The boy was taken to the emergency room, where a pediatric surgeon also tried to pull the bottle loose, but the boy’s tongue wouldn’t budge.

So the hospital’s anesthesia department was consulted. Doctors gave the boy a light sedative and inserted a thin tube, called a cannula, between the tongue and the bottleneck in an attempt to release the presumed vacuum in the bottle. But this had no effect.

That’s when Eich had the idea to inject air into the bottle. Doctors connected the cannula to some IV tubing and a 20-milliliter (0.7 ounce) empty syringe. After a few pumps of air, the boy’s tongue squeezed out of the bottle neck.

His tongue was swollen and “lividly discolored” due to damage to the tongue’s capillaries, the authors said.

Cases of people getting their tongues stuck in bottles are rare, but they do happen, particularly among children, the authors said. In previously reported cases, doctors often needed to cut the bottle and place the child under anesthesia to remove the tongue.

There has been only one other previously reported case of doctors using a positive-pressure method to release the tongue, similar to the one used in the current case. But the former case was published over 30 years ago and “obviously had largely been forgotten,” Eich said.

Eich’s idea to inject air into the bottle was inspired by his recollection of “successfully uncorking a wine bottle” while he was an anesthesiologist-in-training with the use of a similar syringe-and-cannula technique when he didn’t have a bottle opener available, he said.

After the boy’s tongue was freed, doctors gave him medication to reduce the swelling. After 24 hours, the boy was released from the hospital. For three days afterward, the front part of the boy’s tongue was discolored, but after two weeks, his tongue had fully healed, the report said.