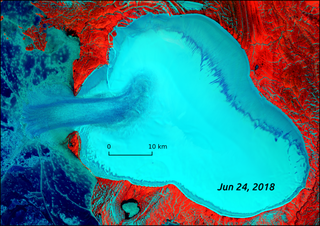 Satellite data shows how ice at the Vavilov Ice Cap flowed in a stream-like pattern toward the ocean on June 24, 2018.
(Image: © AGU/Geophysical Research Letters/Whyjay Zheng.)

For the first time, scientists think they’re watching a fast-moving river of ice being born. These so-called ice streams are rapid, long-lasting flows of ice that form in the middle of more static ice formations known as ice sheets. There are only a handful of them on Earth. They form in remote parts of the arctic and antarctic and, once established, can last decades or even centuries. Until now, no one had ever seen one emerge.

But now, in a new paper published Nov. 21 in the journal Geophysical Research Letters, a team of glaciologists argues that another, shorter-term event that began in 2013 in the Russian Arctic may have sparked the emergence of a long-lasting ice stream. The event, called a glacier surge, is like a frozen flood. A great deal of ice comes loose and bursts out toward the ocean in a rush.

“After the initial surge in 2013, the glacier still retains fast flow at around [1.1 miles per year (1.8 kilometers per year)],” the authors wrote in the new study. That’s “an unusually high and long-lasting speed for a glacier surge.”

Until recently, researchers thought that glacial surges were routine events, independent of the climate change effects that are melting glaciers around the world. Surges, researchers believed, occur as part of normal growth and shrinking cycles in parts of ice caps that can easily replenish themselves. Ice streams were thought to be separate, unrelated phenomena, the researchers wrote. But events in recent years, including this event, are challenging the view that ice streams are unrelated to these surges, and that the surges aren’t primarly climate-driven, the researchers wrote.

The initial ice surge, at a site known as the Vavilov Ice Cap, has now stretched into a years-long event that has permanently transformed the region, according to the paper. The area is a polar desert, so little new ice is added from one year to the next. And 11% of the ice mass in the region — about 10.5 billion tons (9.5 billion metric tons) of ice — has already flowed into the ocean, causing the average elevation of the ice cap to drop significantly. In other words, the ice from the surge is not replenishing itself as scientists typically expect following these sorts of events.

“If you look at the satellite images, it seems like the entire west wing of the ice cap is just dumping into the sea,” Whyjay Zheng, an Earth scientist at Cornell University and lead author of the paper, said in a statement. “No one has ever seen this before.”

The key piece of evidence that the surge had turned into a stream is the emergence of “shear margins” around the stream, the researchers wrote. A surge is just a rapid dumping of ice into the water, but just like liquid water streams, ice streams develop clearly-demarcated paths through the landscape. The edges of the new ice stream, as seen from a satellite, are darker and less reflective, the researchers wrote. That’s indicative of a long-lasting region of fast-moving ice meeting the slower region around it, they said.

“The formation of shear margins over the course of two to three years has not been observed at any other glaciers, to our knowledge,” they wrote.

Researchers are still working to understand ice surges, how they relate to ice streams, and how climate change drives them. But the Vavilov surge is an important new data point to help piece that story together.