Those who switch to artificial sweeteners are typically carrying extra pounds and/or are diabetic. Most are unaware this may be the absolute worst diet change they could implement

Those who consumed two or more diet sodas a day experienced waist circumference increases that were 500 percent greater than those of non-users, over the course of a decade

“[W]e demonstrate that consumption of commonly used non-caloric artificial sweeteners formulations drives the development of glucose intolerance through induction of compositional and functional alterations to the intestinal microbiota.”

The researchers  found that artificial sweeteners alter certain metabolic pathways associated  with metabolic disease, and that it can induce gut dysbiosis and glucose  intolerance in otherwise healthy people.

Glucose intolerance is a condition in which your body loses its ability to cope with high amounts of sugar, and it’s a well-known precursor to type 2 diabetes. It also plays a role in obesity, because the excess sugar in your blood ends up being stored in your fat cells.

The fact that artificial sweeteners may exacerbate metabolic disorders like diabetes is a severe blow to diabetics who dutifully follow recommendations to switch to diet foods and beverages in order to control their diabetes.

The fact that artificial sweeteners are NOT a dieter’s nor a diabetic’s best friend has been known by researchers for some time. The problem is that it hasn’t received the necessary traction in the media—until now.2, 3

Artificial Sweeteners Can Cause Glucose Intolerance by Altering Your Microbiome

The researchers initially started out testing the artificial sweeteners saccharin, aspartame, and sucralose in mice, and were “surprised” when the mice developed glucose intolerance.

As noted by New York University microbiologist Martin Blaser,4 no one had previously considered that artificial sweeteners might exacerbate metabolic disease by way of the microbiome.

Of the three non-caloric sweeteners tested, saccharin had the most pronounced effect on glucose levels. This led to a human trial, in which data from 400 people enrolled in a nutritional study were assessed.

Four of the seven people developed “significant disturbances in their blood glucose,” according to the researchers. Some became pre-diabetic within just a few days!

The reason for this dramatic shift was traced back to alterations in gut bacteria. Some bacteria were killed off, while others started proliferating. As noted in the featured NPR article:5

“It could be that for some people who responded negatively to the artificial sweetener, the bacteria that got crowded out were helping to keep glucose in check.”

This mirrors previous research,6 which has found that bacterial populations in the gut of diabetics differ from non-diabetics.

Another 2008 study demonstrated that sucralose can alter the microbiome in rats by reducing colonies of beneficial gut bacteria, and research published in Clinical and Experimental Rheumatology7 in 2012 revealed a potential link between aspartame and irritable bowel syndrome (IBS). Imbalanced gut flora has also been linked to obesity.

Compelling Results Suggest We Should Reconsider Widespread Use of Artificial Sweeteners

In sharp contrast to many other studies, this one was actually able to clearly show causality, meaning there’s a direct cause and effect relationship between consuming artificial sweeteners and developing elevated blood sugar levels. As reported by The Scientist:8

“Four weeks of treatment with gut bacteria-depleting antibiotics reversed the glucose intolerance in mice that continued to receive saccharin. This led the team to examine whether the microbiomes of the mice were somehow altering glucose metabolism.

Transplantation of feces from non-antibiotic-treated mice that consumed saccharin- or glucose-containing water into germ-free mice within six days induced the same blood-sugar elevations in animals that were never themselves exposed to the sweeteners.

‘This is the elegant and home run experiment that shows causality in mice,’ said [pathologist Cathryn] Nagler.

Using shotgun metagenomic sequencing on the fecal samples, the researchers showed that mice given saccharin or those that received a fecal transplant from saccharin-fed mice had a different microbiome composition compared to mice given sugar or no sweeteners.”

Cathryn Nagler, who wrote an accompanying commentary9 in the journal Nature, said the findings were “very compelling,” noting that “the study suggests… we should step back and reassess our extensive use of artificial sweeteners.”

Aspartame Raises Insulin Levels as Much as Sugar

Other studies have also linked artificial sweeteners to metabolic alterations that promote type 2 diabetes—contrary to conventional thinking and health recommendations.

For example, one 2012 study10 found that chronic lifetime exposure to aspartame, commencing in utero, produced changes in blood glucose parameters in mice. Not only was aspartame found to decrease insulin sensitivity compared to controls, it also wrought havoc on brain function…

Another study published in 2007 in the journal Diabetes Care11 found similar results. Here, the researchers investigated the effect of different macronutrient compositions on plasma glucose and insulin levels during an acute bout of exercise in men with type 2 diabetes.

They hypothesized that using fructose  or aspartame would have a lower impact on insulin release and glucose response  than a sucrose-sweetened meal. Those of you who have been reading my articles  featuring experts on sugar and fructose like Dr.  Richard Johnson and Dr.  Robert Lustig will immediately recognize this as a fatally flawed  hypothesis. And indeed, that is what they discovered. According to the authors:

“Contrary to all expectation, the aspartame breakfast induced a similar rise in glucose and insulin levels at baseline than the sucrose meal, even if the aspartame meal had the same taste, and was 22 percent lower in calories and 10 percent lower in carbohydrates, with an inferior glycemic index… Considering the lack of evidence on the aspartame utilization in patients with type 2 diabetes, we consider that these clinical observations, in an exercise setting, raise important concerns regarding the safety of aspartame as suggested by international guidelines.”

“Obesity is a ‘slow-motion car crash’ which is threatening to bankrupt the NHS, according to its chief executive. Simon Stevens said the problem is now more deadly than smoking and causing millions to suffer life-long illness and disability. He also revealed that – absurdly – the NHS is spending far more on drastic weight loss surgery than trying to prevent the problem in the first place. A quarter of adults and a fifth of children are now considered obese and the rates have almost doubled in 20 years…

Next month, Mr. Stevens will publish a set of plans to  tackle the problem which will see the NHS and private firms urged to do more to  help staff lose weight. Doctors and  nurses will be encouraged to be healthy role models for patients and hospitals  told to ban junk food from canteens. NHS trusts and private companies will  also be urged to help staff lose weight by holding slimming classes, running  clubs or just providing bike racks at work. Mr. Stevens, who took up post last  April, said: ‘Obesity is the new  smoking, and it represents a slow-motion car crash in terms of avoidable  illness and rising health care costs…” [Emphasis  mine]

Those who switch to artificial sweeteners are typically carrying extra pounds and/or are diabetic, or prone to these conditions. Unfortunately, this may be the absolute worst diet change you could implement if you’re overweight or diabetic. Research has repeatedly shown that artificially sweetened no- or low-calorie drinks and other “diet” foods tend to stimulate your appetite, increase cravings for carbs, stimulate fat storage and weight gain, and promote insulin resistance and diabetes.

There are a number of different reasons for this. First of all, artificial sweeteners basically trick your body into thinking that it’s going to receive sugar (calories), but when the sugar doesn’t arrive, your body signals that it needs more, which results in carb cravings. This connection between sweet taste and increased hunger can be found in the medical literature going back at least two decades (see list of selected studies below). But artificial sweeteners also produce a variety of metabolic dysfunctions that promote weight gain—and now we can add gut dysbiosis and altered microbiome to that list!

“In the constant battle to lose inches or at least stay the same, we reach for the diet soda. Two studies presented [June 25, 2011] at the American Diabetes Association’s Scientific Sessions suggest this might be self-defeating behavior. Epidemiologists from the School of Medicine at The University of Texas Health Science Center San Antonio reported data showing that diet soft drink consumption is associated with increased waist circumference in humans, and a second study that found aspartame raised fasting glucose (blood sugar) in diabetes-prone mice…

‘Data from this and other prospective studies  suggest that the promotion of diet sodas  and artificial sweeteners as healthy alternatives may be ill-advised,’ said  Helen P. Hazuda, Ph.D., professor and chief of the Division of Clinical  Epidemiology in the School of Medicine. ‘They may be free of calories but not  of consequences.’” [Emphasis mine]

Here’s a sampling of some of the studies published through the years, clearly refuting the beverage industry’s claims that diet soda helps with weight management. The 2010 review in the Yale Journal of Biology and Medicine16 is of particular relevance here, as it offers a great historical summary of artificial sweeteners in general, and the epidemiological and experimental evidence showing that artificial sweeteners tends to promote weight gain. It also illustrates that as usage of artificial sweeteners has risen, so has obesity rates—despite all these “diet friendly” products. 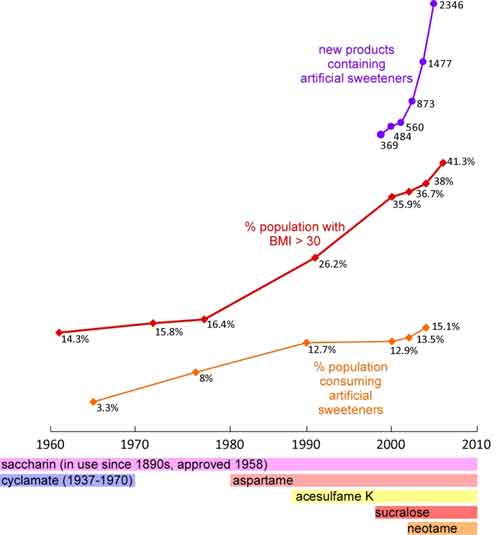 Are There ANY Safe and Healthy Alternatives to Sugar?

One of  the best strategies to kick the sugar habit is to implement intermittent  fasting, and to make sure you’re eating enough healthy fats. Once your body  has the proper fuel, your sweet cravings will radically diminish. If you need a  sweetener you could use stevia or Luo Han, both of which are safe natural sweeteners. For a comprehensive  review of the best and worst sweeteners, please see my previous article, “The  4 Best, and 3 Worst Sweeteners to Have in Your Kitchen.” Just remember, if  you struggle with high blood pressure, high cholesterol, diabetes, or extra weight,  then you have insulin sensitivity issues and would benefit from avoiding ALL  sweeteners.

If  you’re having trouble weaning yourself off soda, try Turbo  Tapping. Turbo Tapping is a clever use of the Emotional Freedom Technique  (EFT), specifically designed to resolve many aspects of an addiction in a  concentrated period of time. Last but not least, if you experience side effects  from aspartame or any other artificial sweetener, please report it to the FDA  (if you live in the United States) without delay. It’s easy to make a report —  just go to the FDA  Consumer Complaint Coordinator page, find the phone number for your state,  and make a call reporting your reaction.