Despite the persistent attempts by criminal governments and arrogant academics to crush the field of cold fusion, a commercial breakthrough has just been announced that marks a revolution for the future of our world. The Brillouin Energy Corp. has announced a breakthrough Hydrogen Hot Tube (HHT) Boiler System which uses solid-state low-energy nuclear reactions (LENR) to produce controlled excess heat through the fusion of hydrogen atoms into helium, releasing no emissions, no radiation and no “spent” radioactive fuel material like what we see in the nuclear power industry This breakthrough uses solid state metal lattice technology that was once dismissed by nearly all conventional physicists, yet has been reproduced and proven in hundreds of laboratories around the world over the last several decades. The technology — once dismissed as “impossible” by mainstream physicists — has now been validated, patented and published in numerous scientific journals, even as it is not yet fully understand by mainstream physicists. Only those who are ignorant and arrogant now dismiss the technology, while those who are informed are embracing this tech as a ready solution to help feed, heat and power the world.

In a world where Western Europe is now facing winters of energy scarcity due to war with Russia — and Russia’s sharply reduced gas outflows via Nord Stream 1 and other channels — the Brillouin Energy Corp has a ready solution to heat homes, commercial buildings and military infrastructure at a fraction of current cost, without needing any fossil fuels whatsoever. As announced on the Brillouin Energy website, “The HHT™ boiler system uses ordinary hydrogen to produce scalable heat on demand at an exceedingly low cost, without any emissions or other pollutants.”

At its current stage, the HHT is immediately applicable to dramatically lowering the cost of, and reducing the carbon footprint of, hot water boilers and hydronic (radiant) heaters on both a residential and commercial scale. With further development, this system can also power improved HVAC systems, and ultimately provide a dramatic breakthrough in generating electric power on a decentralized, pollution-free basis at the point of demand.

Cold fusion technology (LENR) produces excess heat in a slow, sustained fusion reaction that takes place at the nano scale. Unlike fossil fuels, it does not produce high energy combustion phenomena that would support high torque engine applications, so it’s not applicable to replace combustion engines in trains, trucks, automobiles or airplanes. Rather, it heats water through controlled solid-state nuclear fusion reactions. This hot water can be used in a simple radiant heat distribution system (boilers, industrial heaters, etc.) or, with additional development, it can be used to replace coal in coal-fired power plants. It can even be used (with substantial retrofitting effort) to replace nuclear fuel rods in nuclear power plants, eliminating the entire issue of radioactivity and spent nuclear fuel. 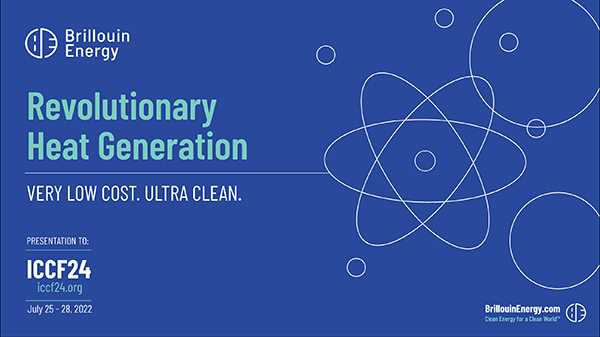 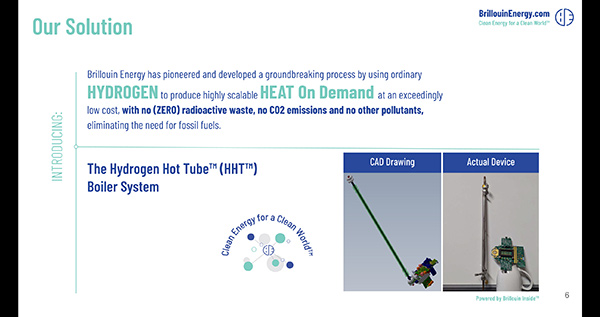 The solid-state LENR reaction consumes microscopic amounts of hydrogen atoms, fusing them into helium while releasing excess energy consistent with mass to energy conversions well known by the physics community. The energy density of water — which obviously contains hydrogen — is almost unimaginable. According to Brillouin, a single class of water contains enough hydrogen to power 30,000 homes for a year, assuming 100% conversion of hydrogen to heat via LENR fusion: 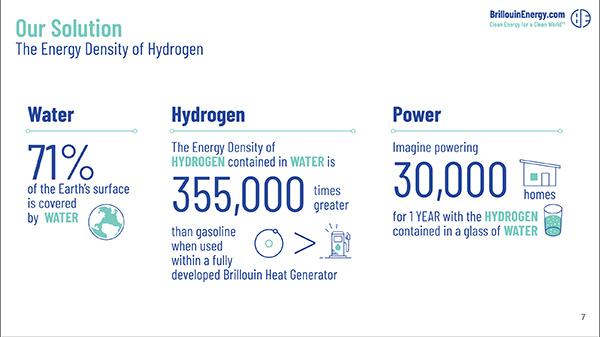 Additionally, climate cultists who currently despise CO2 — even though CO2 grows crops and “greens” the planet thanks to photosynthesis — should also embrace LENR technology, given that LENR produces no CO2 emissions whatsoever. 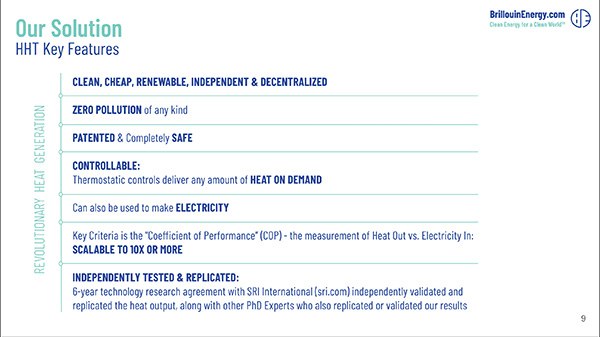 With a bit of additional engineering, Brillouin systems could be harnessed to generate electricity through the use of “micro boilers” that drive small turbines thanks to the effects of steam expansion. This means a small unit — perhaps the size of a refrigerator — could power a home and produce enough excess electricity to also charge electric vehicles.

One key advantage to this system is that turbines produce alternating current (AC) which is immediately usable by household devices, without needing to be transformed from direct current (DC) which is what solar panels produce.

From the Brillouin press release:

“This technology has been independently tested or validated by several of the world’s leading nuclear scientists and laboratories. Brillouin Energy is ready now to enter into the next phase: commercialization,” said David Firshein, CFO of Brillouin Energy. “The HHT test system that we are demonstrating at ICCF24 is the first ever licensable system that is transportable—it can be packed up and shipped to potential OEM License Partners for further testing and evaluation. This is a crucial step toward solving today’s massive challenges of energy security and climate change.”

On a large scale with additional engineering, these units could power naval vessels, industrial buildings, military bases, schools or even entire cities. Importantly, since water is readily available to every nation on Earth, this technology would sharply ease global dependence on fossil fuels — a source of conflict and resource wars. 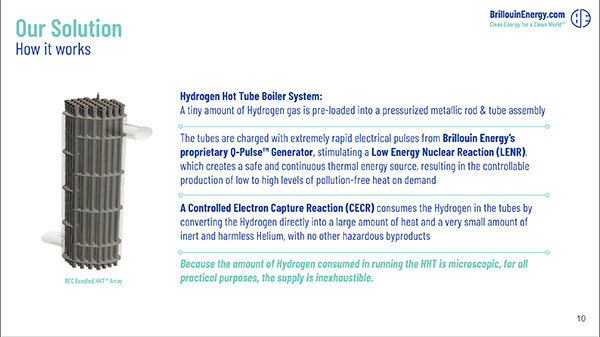 LENR has been systematically suppressed by governments for decades for the simple reason that governments don’t want humanity to be free. They use scarcity as a weapon of control, and with globalists now trying to achieve global depopulation, they are engineering food scarcity and energy scarcity as leverage to cause mass starvation and economic collapse. This means LENR technology may help free humanity from the death grip of anti-human globalists who are pursuing an agenda of mass extermination of the human race.

Food abundance can be easily achieved almost everywhere around the world when greenhouses can be affordably heated with cold fusion technology in the winter months. This allows year-round growing of local crops in colder regions such as Canada and Western Europe.

Additionally, LENR technology does not require the toxic heavy metals that are used to manufacture solar panels. The solar industry is being exposed as a major polluter, with toxic metals accumulating in landfill due to spent solar panels being discarded. Those metals are derived from mining operations that are often carried out in countries like China, in total disregard to ecological consequences.

LENR technology can also theoretically power water desalination plants around the world, providing fresh water for crop irrigation without any need to consume fossil fuels in the process.

With the ability to affordably heat greenhouses while also powering water desalination plants, LENR will mean affordable, abundant food for everyone once properly harnessed and engineered for these applications.

Brillouin Energy Corp is currently seeking investors as described on its “Opportunity” page. We cannot speak to the risks or rewards of investing in Brillouin, but we can tell you that some of the biggest corporations in the world are looking at this tech and evaluating it. It seems inevitable that someone is going to commercialize cold fusion and change the world. Right now, Brillouin seems to be at the head of the pack, although that’s no guarantee they will be the market leader five years from now.