Paleontology has a way of throwing curveballs at science more than other disciplines. For example, these days we have the fascinating case of the “Dragon Man,” after a Chinese family has donated a complete human cranium that’s far bigger than any other cranium seen in the Homo genus. 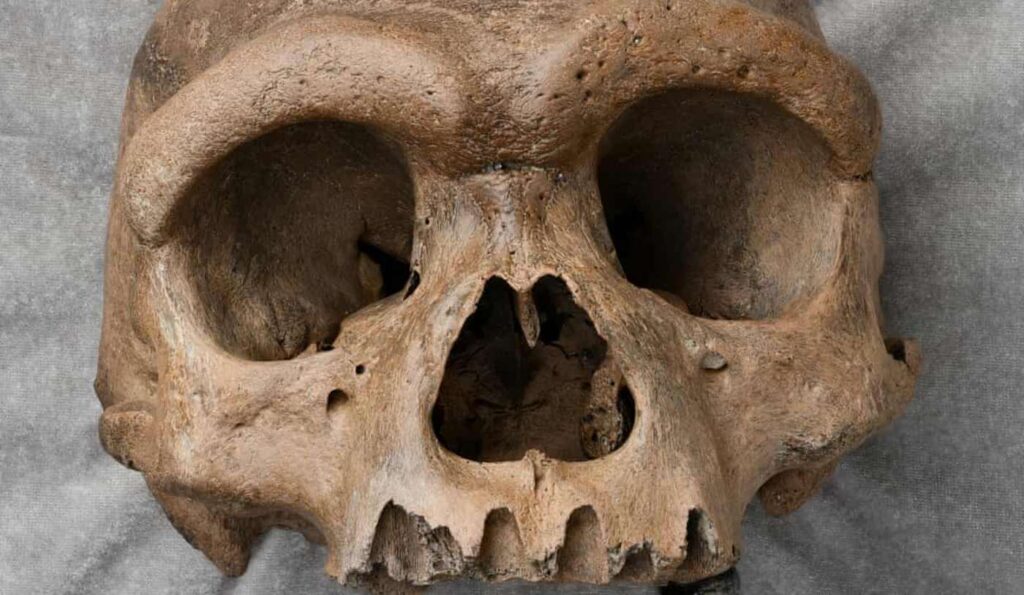 The skull—which was kept hidden in a wall for 90 years—is now being theorized as a new species in our genus, and one that shares more commonalities with us than the Neanderthal.

It was three years ago that a farming family donated the skull, which had been found in the province of Harbin in China’s far north, to Harbin GEO University. The story goes that it was discovered by a family member in a muddy bank during construction of a bridge, and that unsure of what to do with it, they hid it inside a wall for almost a century.

Now, after painstaking chemical detective work and analyses against other Homo sapien craniums, researchers Ji Qiang and Ni Xijun are positing it is a new species, Homo Longi or “Dragon Man.” He is dated as having lived 136,000 years ago during the Middle Pleistocene, and the mineral contents found within the bone are strikingly similar to other human remains dated from the same period found in Harbin.

“The discovery of the Harbin cranium and our analyses suggest that there is a third lineage of archaic human [that] once lived in Asia, and this lineage has [a] closer relationship with H. sapiens than the Neanderthals,” lead-author Ni Xijun told Smithsonian.

The basic routes to the new species conclusion were that it’s the largest of all known Homo skulls. It has a comically thick brow, and square-shaped eye sockets. More advanced work included comparing 600 morphological characteristics of the Longi skull with 95 other skulls from varies species.

A following mathematical analysis suggested that modern humans evolved down through three separate lineages, one being H. longi and a number of other Pleistocene Asian humans like those found in Hualongdong and Dali.

Another possibility is that the skull is actually what scientists have for years been calling a “Denisovan,” a mysterious group of humans that existed in Siberia but who left behind only a few teeth and two bone shards.

Chris Stringer at the Natural History Museum in London contributed to the project, but he feels it’s not worth creating a new species name, as it’s generally understood that shapes of skulls, shoulder-width, nasal cavity size, or any of the characteristics we use to distinguish species today weren’t important at the time when it came to breeding. There are individuals today who carry a surprising amount of Neanderthal DNA.

“I prefer to call it Homo daliensis, but it’s not a big deal,” Springer said, speaking with The Guardian. “The important thing is the third lineage of later humans that are separate from Neanderthals and separate from Homo sapiens.”

“Certainly this specimen could be Denisovan but we have to be cautious. What we need is much more complete skeletal material of the Denisovans alongside DNA,” he added.

One thing’s for certain—the huge skull housed a big brain, and both were fitted to a big body. The skull belonged to a man in his 50s, and would have been as tall as modern adult males. His grossly enlarged nasal cavity fits the needs of a high-octane hunter-gatherer lifestyle, and is typical of animal adaptations necessary to survive in the brutal cold of the northern winters.

READ: After Decades of Work, Scientists Have Mapped the Entire Surface of the Moon for the First Time

The other Asian species like H. dalinesis lived down in the tropical south. Paleoanthropologists feel that the large brain cavity inherent in both skulls would suit the challenges of surviving in two different harsh climates, and that other adaptations developed later.