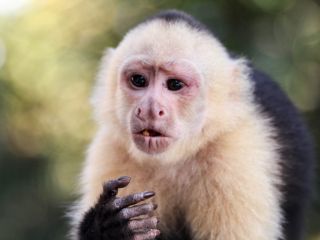 When it comes to winning games and solving puzzles, sometimes monkeys play smarter than humans.

Monkeys may show off their physical flexibility as they clamber over tangled tree branches, but the animals also display impressive “cognitive flexibility,” or the ability to quickly change how they think about, and work to solve, a problem. Whereas monkeys can think on their feet, humans often become set in their ways and cling to inefficient strategies for problem solving, according to new research.

“We are a unique species and have various ways in which we are exceptionally different from every other creature on the planet. But we’re also sometimes really dumb,” study co-author Julia Watzek, a graduate student in psychology at Georgia State University, said in a statement. For the research, published Sept. 13 in the journal Scientific Reports, Watzek and her colleagues pitted capuchin and rhesus macaque monkeys against undergraduate students in a game of wits — in other words, a simple computer game.

In the game, four squares appeared on screen during each trial: one striped, one spotted and two blank. In training sessions, players learned that clicking the striped square and then the spotted square would cause a blue triangle to pop up in place of one of the blank squares. Clicking the blue triangle produced a reward — in this case, an auditory whoop for humans to indicate that they had solved the puzzle, and a banana pellet for monkeys.

“They kind of like playing computer games and getting banana pellets,” Watzek told Live Science. The primates voluntarily enter the testing compartment during the study and interact with the computer using a modified video game controller.

Humans can get stuck doing things “the way we’ve always done it” & miss out on easier solutions. Capuchins and rhesus monkeys don’t. Find out more in our newest paper on cognitive shortcut use out in @SciReports! w/ @SezDoesScience & SF Brosnan @CogSciGSU https://rdcu.be/bQ1as

Partway through the game, the researchers introduced a shortcut: a quick-and-dirty cheat to win the game without following the established rules.

Suddenly, the blue triangle began to appear at the start of gameplay, alongside the striped and spotted squares. If a player clicked on the blue triangle immediately, they received their reward right away. This shortcut appeared in half of the subsequent trials. About 70% of the monkeys took advantage of the shortcut the very first time it appeared, and more than 20% used the strategy whenever possible.

In comparison, only one human out of 56 took the shortcut when it first appeared, and none used the strategy in every trial they could. Instead, they stuck to what they knew, clicking the striped and spotted squares in succession before daring to prod the blue triangle.

“I am really surprised that the humans, a sizable portion … just keep using the same strategy,” Watzek told Live Science. In a related experiment, the same human participants were shown a video of someone else employing the shortcut and were explicitly told not to “be afraid to try something new.” Even when granted creative license, about 30% of participants wouldn’t budge from their learned technique.

The authors suggested that educational practices may make humans more likely to cling to one problem-solving strategy rather than looking for alternatives. “We don’t think this is necessarily the whole answer, but it’s certainly an aspect,” Watzek said. For example, the researchers noted that standardized testing and formal schooling in Western cultures “may encourage rote repetition and search for a single correct solution,” the researchers wrote in the paper.

However, this so-called cognitive bias isn’t unique to Western cultures. Study co-author Sarah Pope, then a graduate student in the Neuroscience Institute at Georgia State, conducted a related experiment with members of the Himba tribe in Namibia and found that, though the participants used the shortcut more often than Western undergraduates, 60% to 70% still failed to adopt the strategy. Another study of schoolchildren ages 7 to 10 found that kids were four times more likely than adults to use the shortcut, though more than half still clung to the learned strategy. Baboons included in the same study used the shortcut “immediately and in 99% of trials.”

Although the monkeys were clever enough to spot the shortcut in the new study, they did take longer than humans to pick up the original game rules, the researchers noted. This learning curve may have made it easier for the primates to bend those rules later on, though more research is needed to explore this possibility, the researchers added.

The new study highlights how learned biases can impair human decision making and limit our imaginations, the researchers said. “If solution strategies are so entrenched that new information is ignored, they can lead us to make inefficient decisions and miss opportunities,” the authors wrote. And though monkeys outperformed people in this particular study, “that doesn’t mean that they’re just categorically smarter than humans,” Watzek noted.

“Cognitive flexibility” represents a delicate balance between exploiting known strategies and exploring alternatives, she said. Comparing how primates and humans make decisions can clarify where biases in human reasoning originate: Does our evolutionary history make us prone to certain illogical tendencies? Or does human culture, education and language train us to play by the rules?

“It is interesting to think through ways in which we train our children to think a specific way and stay in the box and not outside of it,” Watzek said in the statement. “There are good reasons for why we do what we do, but I think sometimes it can get us into a lot of trouble.”