Astronomers have discovered the oldest cluster of galaxies ever seen. 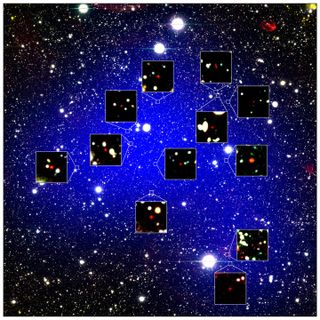 This image shows the region where the ancient galactic structure was found. The blue shading shows the area it covers. The red objects in the zoomed-in bits are the 12 galaxies.
(Image: © NAOJ/Harikane et al.)

Astronomers have discovered the oldest cluster of galaxies ever seen, which dates to the early universe.

The discovery, which could help explain the shape of the modern cosmos, reveals 12 galaxies that existed in a clump 13 billion years ago — just about 700 million years after the Big Bang. We can see them now because they’re so far away in the expanding universe (13 billion light-years) that their starlight is only now reaching Earth. One of the galaxies, a mammoth named Himiko after a mythological Japanese queen, was discovered a decade ago by the same team.

Surprisingly, the other 11 galaxies aren’t clustered around the giant Himiko, the researchers wrote in a paper that will be published on Sept. 30 in The Astrophysical Journal and is available as a draft on the website arXiv. Instead, Himiko sits at the edge of the system, which the researchers call a “protocluster” because it’s so small and ancient compared to most of the clusters we can see in the universe..

“It is reasonable to find a protocluster near a massive object, such as Himiko. However, we’re surprised to see that Himiko was located not in the center of the protocluster but on the edge, 500 million light-years away from the center,” Masami Ouchi, a co-author of the paper and an astronomer at the National Astronomical Observatory of Japan and the University of Tokyo, said in a statement.

Understanding how galaxy clusters came to be turns out to be important for understanding the galaxies they contain. Most galaxies, including the Milky Way, show up in clumps with other galaxies, so the galaxies aren’t evenly distributed throughout the universe. And that clumping seems to affect their behavior, astronomers have said. Galaxies in high-density, clumped environments full of galaxies form stars in different ways than do galaxies in low-density environments empty of galaxies. And the impact of clumping seems to have changed over time, the researchers said.

So, clumped-up galaxies these days form stars less often than their more independant cousins do. It’s as if they’re aging faster in their clusters, the researchers wrote, becoming geriatric and giving up on making new stars.

But in the ancient universe, the trend seems to have been reversed. Galaxies in highly packed clusters formed stars faster, not slower, remaining young and spry compared with their cousins not in dense clusters.

Still, “protoclusters” like this one from the early eons of the universe are rarely found and are poorly understood, the researchers wrote. These clumps tend to be much smaller than modern examples, which can contain hundreds of galaxies.

The further back telescopes peer into time, the fewer protoclusters turn up. It’s possible many of them are simply obscured by intergalactic dust. The astronomers hope, they wrote, that the new discovery will help flesh out the picture and explain how the state of things 13 billion years ago changed over time to produce that clustered universe we see today.