Researchers made a makeshift “elevator” in the ocean to grow giant kelp, the world’s biggest species of marine algae and a promising source of biofuel. The researchers explained that giant kelp needs to be moved up and down the ocean column every day to thrive. 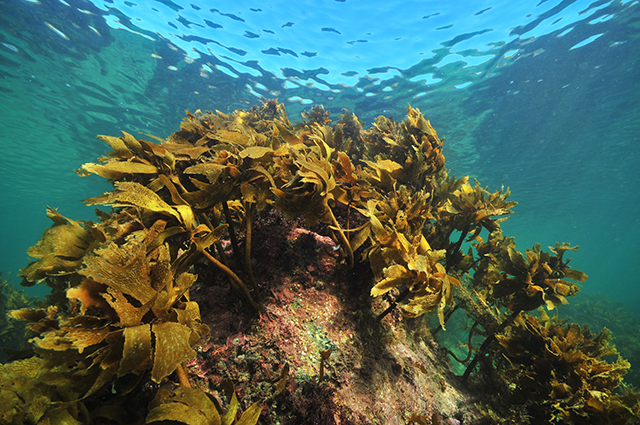 “The key idea is moving kelp stocks daily up to near-surface waters for sunlight and down to darker waters for nutrients,” Diane Kim and Igancio Navarrete, the lead researchers of the study who are both from the University of Southern California (USC), wrote alongside their USC colleague Jessica Dutton for the Conversation.

The findings of the study are due to be published this May in the journal Renewable and Sustainable Energy Reviews.

Why use giant kelp for biofuel?

Marine biomass can be converted into different forms of energy, such as ethanol and biodiesel. Ethanol is commonly produced from corn while biodiesel is made from oily plants such as soybeans and oil palm. But scaling up the production of these land crops drives up the need for deforestation since it competes with other uses of farmland.

Giant kelp is a promising alternative to these biofuel sources because it does not require land, fresh water and fertilizer. The researchers also estimate that producing enough giant kelp to power the entire U.S. transportation sector will require just a small fraction of the U.S. Exclusive Economic Zone, or the ocean area that extends 200 nautical miles from the coastline.

But growing giant kelp isn’t quite as straightforward as growing crops on land because kelp only thrives where both sunlight and nutrients are plenty. But the ocean’s sunlit layer does not contain enough nutrients to support kelp growth while the nutrient-rich seabed receives very little sunlight. Though deep water brings along nutrients whenever it rises to the ocean surface, this process is seasonal.

One possible solution is an approach called “depth cycling.” This involves delivering giant kelp to deep nutrient-rich water at night and bringing it back up to shallow depths during the day so it can catch some sunlight.

The researchers built an automated open ocean structure that they called “kelp elevator.” This kelp-carrying structure was anchored near the USC’s Wrigley Marine Science Center in California’s Catalina Island. A solar-powered winch would raise and lower the elevator every day to cycle algae between deep and shallow water.

As part of an experiment, the researchers cycled 35 juvenile kelp plants for three months and planted another set at a coastal kelp habitat for comparison. The depth-cycled plants grew four times bigger than those planted at the habitat, suggesting that they absorbed enough nutrients during their stay down deeper, darker water. Additionally, they withstood daily changes in water pressure as they moved between depths of 30 feet and 262 feet.

These results led the researchers to conclude that depth cycling is a viable cultivation strategy for kelp. “To our knowledge, this was the first attempt to study the biological effects of physical depth cycling on kelp. Prior studies focused on artificially pumping deep nutrient-rich water to the surface,” the researchers wrote.

The researchers plan to follow up their study with an analysis of the factors that increase yields, including timing, water depth and kelp genetics. They acknowledge that many unknowns still need to be studied, such as the proper management of kelp farms and the possibility that scaling up kelp production can have a negative impact on the environment. (Related: Study: Marine algae thrive when given sugarcane bagasse.)

But overall, the researchers believe that marine biomass has great potential for addressing modern sustainibility challenges, such as clearing forests for agriculture.

Learn more about marine biomass and other renewable sources of energy at Power.news.