Quorn is a fungus-based ferment used in food production as a meat substitute. It was originally developed by one of the largest chemical companies in Great Britain

The fungus Fusarium venenatum is first grown in large fermentation vats. Once the water is removed,what is left is a paste-like biomass, which is then processed into various food products

Since its launch in 1985, several studies have raised concerns about Quorn’s safety—especially in people with food and/or mold allergies

While factory-farmed meats are best avoided, organically raised, grass-fed or pastured animal products provide valuable nutrients that have no equivalence in the plant kingdom

If you want to stay healthy, the simple rule is to avoid processed foods and this is certainly true for meat substitutes. There are a number of meat substitutes on the market, but some appear to be more unsavory than others, in terms of safety.

The Quorn brand meat substitute falls into this category. Quorn is a fungus-based ferment. Its advertised claims include being 75 percent lower in fat and 50 percent lower in calories compared to regular meat. It’s also high in fiber and protein, and low in cholesterol and salt.

That may sound all well and good, but there are lingering questions about its ability to cause severe reactions in some people. In an August 18 press release,1 the Center for Science in the Public Interest (CSPI) writes:

“Of the several shortcomings of the Food and Drug Administration’s oversight of food additives exposed in today’s Washington Post,2 none is more glaring than the agency’s lack of curiosity in the safety of Quorn-brand meat substitutes…

The fungus at issue, Fusarium venenatum, had never before been used in human food before it became Quorn. (‘Venenatum,’ inauspiciously, is Latin for poisonous.)”

It was originally developed by one of the largest chemical companies in Great Britain called Imperial Chemical Industries, and this in and of itself could serve as a clue as to its health potential…

The fungus, Fusarium venenatum, is first grown in large fermentation vats, where it is fed with oxygen, glucose, and other nutrients. Once the water is removed, what is left is a paste-like biomass, which is then processed into various food products.

Since its inception, several studies have raised concerns about Quorn’s safety—especially in people with food and/or mold allergies. A CSPI survey also found that mycoprotein is more likely to cause adverse reactions than other common allergenic foods such as shellfish, milk, and peanuts.

So far, CSPI has collected more than 2,000 reports of adverse reactions to Quorn.3, 4 Adverse effects include:

Two deaths5 are even suspected to have resulted from eating the Quorn brand meat substitute. In a previous post,6 CSPI also noted that an early study done by the manufacturer found that 10 percent of 200 human subjects developed nausea or a stomachache after eating Quorn.

This might be expected if the name of the fungus is in any way indicative of its health effects. After all, the Latin word venenatum means “filled with venom.”

Should You Eat Meat?

While I certainly sympathize with those who choose to abstain from meat for ethical reasons, there isn’t a single meat-substitute on the market that I would recommend, and that includes soy protein, which may even be worse than Quorn.

There are health benefits to eating meat and other animal products that simply have no equivalence in the plant kingdom. However, the KEY is to choose your meat wisely. Doing so can eliminate many of the ethical objections as well.

Animals raised in confined animal feeding operations (CAFOs) are best avoided, both for health and ethical reasons. CAFO cows are fattened for slaughter in gigantic feed lots as quickly as possible (on average between 14 and 18 months) with the help of grains and growth promoting drugs, including antibiotics.

This routine practice, which is done predominantly for financial reasons, has led to the current scourge of antibiotic-resistant disease, which now kills at least 23,000 Americans each year.

Besides raising your risk of antibiotic-resistant disease, regularly consuming small doses of antibiotics is also a surefire way to destroy your gut health, which in turn will have a detrimental effect on your overall health and immune function.

Organically raised, grass-fed or pastured animal products on the other hand can provide valuable nutrients that your body requires for optimal functioning, such as high-quality protein.

Grass-fed beef also tends to be leaner, and have higher levels of vitamins and minerals such as calcium, magnesium, and potassium. It also has a healthier ratio of omega-6 to omega-3 fats.

But perhaps the most crucial factor that makes grass-fed beef better than CAFO is that it doesn’t contain antibiotics and hazardous growth-promoters, and hasn’t been fed genetically engineered and /or glyphosate-contaminated grains.

I firmly believe we have to stop supporting our current CAFO practices for meat production and focus on more health- and environmentally-friendly options. CAFO products really have little if any redeeming value, besides being slightly cheaper at the checkout line.

This lower cost comes at a high price, however—a price that many people fail to take into account. Case in point: the California slaughterhouse Rancho Feeding Corporation in Petaluma was recently charged with “knowingly processing and distributing meat from cancerous cows,” according to a CNN report.7

Four former workers at the slaughterhouse, including the general manager and co-owner Jesse J. Amaral Jr., have now been indicted on charges of conspiring to sell and distribute “adulterated, misbranded, and uninspected” meat.

Authorities recalled nearly 10 million pounds of meat from the slaughterhouse in February. Nestle also issued a voluntary recall for its Philly Steak and Cheese Hot Pockets, which contained meat from Rancho. According to CNN:

“Prosecutors allege that Amaral directed Corda and Cabrera to circumvent inspection procedures for certain cows with signs of epithelioma of the eye, also known as ‘cancer eye.’ This included directing employees to carve ‘USDA Condemned’ stamps out of certain cow carcasses and to process them for sale and distribution, despite having been rejected by the U.S. Department of Agriculture veterinarian.

Corda and Cabrera are also alleged to have replaced the heads of sick cows with those of healthy ones, placing the healthy heads next to the bodies of cows whose eyes had signs of cancer. The switch occurred during the inspectors’ lunch break, prosecutors said.”

If convicted, the four workers could face up to 20 years imprisonment and $250,000 in fines. In February, Rancho Feeding was sold to Marin Sun Farms, which specializes in pasture-raised livestock, so chances are the facility may be properly rehabilitated. As noted by the LA Times,8 it’s now the last remaining beef slaughterhouse in the Bay Area.

Besides antibiotics, CAFO livestock are also given a number of other drugs, including drugs that are banned in other countries for suspected adverse health effects. Ractopamine, for example, is a beta-agonist drug that increases protein synthesis, thereby making the animal more muscular. This reduces the fat content of the meat and increases the profit per animal.

Beta-agonist drugs have been used in US cattle production since 2003. The drug is administered in the days leading up to slaughter, and as much as 20 percent of it can remain in the meat you buy. This is disconcerting when you consider that the drug label warns: “Not for use in humans,” and “individuals with cardiovascular disease should exercise special caution to avoid exposure.”

Ractopamine is banned from food production in at least 160 countries around the world, including countries across Europe, Russia, mainland China, and Republic of China (Taiwan), due to its suspected health effects. Animal research has linked ractopamine to:

In pigs and cattle, FDA reports10 link the drug to: excessive hunger, anorexia, bloat, respiratory and hoof problems, lameness, stiffness, stress and aggression, and death. In fact, of all reported side effects, death tops the list as the most reported problem associated with ractopamine. In humans, ractopamine is known to affect the human cardiovascular system, and is thought to be responsible for hyperactivity. It may also cause chromosomal abnormalities and behavioral changes.

Zilmax is another beta-agonist drug used in the US, and this drug has also been linked to horrific side effects in cattle. In August, 2013, Tyson Food Inc issued a statement saying it would no longer purchase Zilmax-fed cattle for slaughter due to animal welfare concerns.11 The company had noticed that many of the cows that had been fed the drug had trouble walking. The cattle also displayed other behavioral issues. FDA records show at least 285 cattle unexpectedly died or were euthanized after receiving Zilmax between 2007 and 2013—many of them had lost their hooves. Other reported adverse effects in cattle following the administration of Zilmax include:

Rethink Your Shopping Habits to Protect Your Family’s Health

When a feed or feed additive makes an animal sick, infirm, or dead, is it really wise for you to eat the meat from it? I would suggest the answer is a firm no. Hence, when it comes to animal products, the closer you can get to the grower, the better. Ideally, you’ll want to get all your animal products, including meat, chicken, and eggs, from smaller community farms with free-ranging animals that are organically fed and locally marketed.

This is the way food has been raised and distributed for centuries, before the era of corrupted politics and corporate greed took over. Small-scale butchering facilities are also more humane, which is an important concern from an ethical standpoint. The following organizations can help you locate farm-fresh foods in your local area, raised in a humane, sustainable manner: 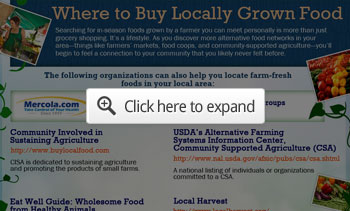 From September 7th -13th we launch the fourth Mercury-Free Dentistry Week. We set aside an entire week dedicated to ending the use of dental amalgam — a primitive, pre-Civil War, pollutant that leads to cracked teeth — for three reasons:

Resources to Help You Find a Biological Dentist

The following organizations can help you to find a mercury-free, biological dentist:

Together, Let’s Help Charlie Brown and Consumers for Dental Choice Get to the Finish Line