So ancient a love affair exists between humans and saffron, that it can no longer reproduce without our help. Could its antidepressant and health-promoting properties be an example of saffron ‘returning the favor’?

“Flowers always make people better, happier, and more helpful; they are sunshine, food and medicine for the soul.” ~ Luther Burbank

A alluring clue to how ancient the love affair between our species and saffron goes is that the plant known in Latin as Crocos sativus cannot reproduce without human assistance. Sterile, incapable of producing viable seeds, its bulb-like, starch-storing organ (clustered in what are known as corms), must painstakingly dug up, broken into individual bulbs, and replanted by hand.

As we discussed in a previous article about this truly magical flower,

“50,000 year-old depictions of prehistoric places in northwest Iran contained saffron-based pigments, indicating the human relationship with saffron is as old as time itself.”

What would have inspired this relationship? What would have compelled ancient farmers and herbalists to perpetuate, unbroken, this plant’s life cycle for thousands of generations? Is this an example of co-evolutionary interdependence? 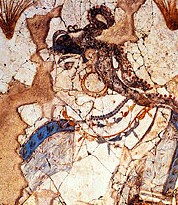 A Minoan goddess supervising saffron use

Still today, it takes a Herculean effort to produce enough saffron to meet the global demand, that is barely met. One hundred and fifty hand-picked flowers still yields just 1,000 mg (0.035 oz) of dry saffron threads, and costs approximately $1,000 U.S. dollars a pound on the global market; there is no questioning that our motivation to engage saffron as a primary plant ally is as powerful today as it was a thousand years ago.

There must be more to the human desire to produce and acquire saffron than its culinary role as a seasoning alone. Perhaps saffron possesses powerful medicinal and or psychoactive properties, capable of alleviating human suffering and/or brightening the human condition, that we are only now beginning to rediscover through the optic of modern scientific research….

Saffron: Plenty of Evidence for Appreciating Its Role as a Medicine Botanical

Indeed, our ongoing research indexing project at Greenmedinfo.com reveals saffron has over 40 therapeutic applications in medicine, preventing and/or treating conditions such as erectile dysfunction, macular degeneration, Alzheimer’s disease, and even clinically diagnosed depression.

Notably, many of the conditions saffron seems to ameliorate are psychiatric, that is, address imbalances in the human psyche, soul.

“Flowers… are a proud assertion that a ray of beauty outvalues all the utilities of the world.” ~ Ralph Waldo Emerson

Flowers embody something truly wondrous about the design of the universe. They are what I would call an example of the universe’s intrinsic superfluity (definition: “an unnecessarily or excessively large amount or number of something”), embodying a seemingly unnecessary excess of beauty. Flowers remind us that the fabric of reality is comprised of more than just atoms.  There is poetry, abundance, and aesthetic inspiration built into the structure of things, as long as we have the eyes and sense to perceive it. 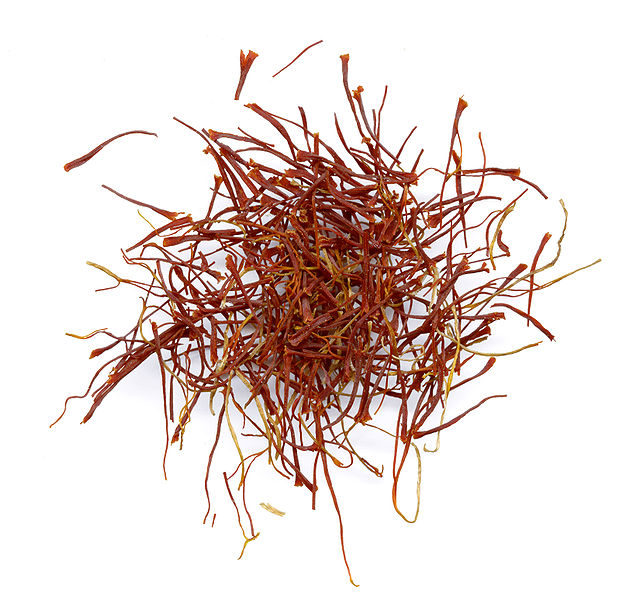 Saffron, I believe, is a perfect example of the ‘benevolent excess,’ as well as intelligence and compassion, built into the relationships between diverse species on this planet. When come to appreciate the divine order of things inscribed within the web of life, and the way in which species have spent hundreds of millions of years depending upon, appreciating, and supporting one another, clearly saffron’s unique properties to ameliorate physical and psycho-spiritual suffering in humans should not be that surprising.

For additional evidence that plants express a type of compassion towards the human species, read my article: Turmeric’s Healing Power: A Physical Manifestation of Compassion? Why We Need Flowers

A 2005 human study performed at Rutgers University in NJ, titled “An Environmental Approach to Positive Emotions: Flower“, revealed that all study subjects responded positively in behavior and emotion to receiving flowers. As summarized by HortiDaily, the 10-week study revealed:

The paper itself provides an interesting co-evolutionary explanation for why flowers have such a powerful mood-enhancing effect:

“Our hypothesis is that cultivated flowers fit into an emotional niche – their sensory properties elicit human positive emotions. The flowering plants are thereby rewarding to humans and in return, the cultivated flowers receive propagation that  only humans can provide. Demonstration of such a phenomenon fills several gaps in the literature. It supports the basic significance of emotion for survival. As a corollary it supports the adaptive function of positive as well as negative emotion. Finally it opens an area of investigation into the psychological relationships between humans and other species through their sensory properties that have been relatively neglected.”

The paper also draws an interesting parallel between flower-human and flower-dog co-evolution:

“We hypothesize that as flowers moved into the new niche created by agriculture there was an increase in variation and the more pleasing and attracting flowers were allowed to remain. At some point humans might have moved from merely tolerating these weedy species to actively saving and sowing the seeds. It has not escaped our attention that the scenario we present for the evolution of flowers is very much like the scenario that Budiansky (1994) presents for the evolution of dogs. Flowers may be the plant equivalent of companion animals.“  [emphasis added]

The Evidence For Saffron As An Antidepressnt Drug Alternative

So, what is the evidence to support the notion that flowers, and saffron, elevates the human spirit, contributes to happiness and well-being?

There is a rather extensive body of human clinical literature on its role in treating depression, with a recent meta-analysis of the literature concluding: “Findings from clinical trials conducted to date indicate that saffron supplementation can improve symptoms of depression in adults with MDD [Major Depressive Disorder]“[1]

Also, a study reported about on Life Extension reveals that saffron is as at least as effective as the blockbuster pharmaceutical drug Prozac for treating mild to moderate depression:

At the close of the 6-week, double-blind, randomized trial, saffron was found to be as effective as Prozac® in the treatment of mild to moderate depression. There were no significant differences in unwanted reactions.

How Can A Flower Can Do This?

I believe that saffron’s power to lift the human spirit may demonstrate the intelligent design woven into the co-evolutionary relationship between certain interdependent species. After all, mammals and angiosperms (the flowering plants) which comprise about 250,000 species and include most of the plants that provide the modern world its diet, co-evolved for at least 200 million years together, eventually rising to become dominant life forms on this planet. In other words, we are designed to need one another, and in one another’s absence, something goes missing — a piece of ourselves, our psyche, without which we can not be whole, healthy and holy [all 3 words share the same etymological root].

Regardless of the exact mechanical explanation operative between saffron and human physiology, we now have the optic of modern experimental and clinical research to confirm that ancient plant medicines like saffron are effective at alleviating suffering. Considering that saffron is a culinary herb, safely used the world over, and can be used as a spice in everyday cooking, it would best to incorporate it not as heroic herbal intervention long after depression has established itself as a diagnosed disorder, but beforehand as a preventive to enjoy and appreciate in meals lovingly prepared and shared.