The Millennium Seed Bank Partnership estimates that 60,000 to 100,000 plant species are in danger of extinction

Seeds represent the foundation of life. We depend on them for food, for medicine and for our very survival. In many ways, you can trace the underpinnings of any given culture through the heritage of their crops and seeds.

It wasn’t long ago when seeds were mostly the concern of farmers who, as the Worldwatch Institute put it, “were the seed producers and the guardians of societies’ crop heritage.”1 But this is no longer the case.

Once considered to be the property of all, like water or even air, seeds have become largely privatized, such that only a handful of companies now control the global food supply.

Agriculture has been around for 10,000 years, but the privatization of seeds has only occurred very recently. In that short time, seed diversity has been decimated, farmers have been put out of business due to rising seed costs… and the pesticide companies that control most seeds today have flourished.

“…by the early 1900s, the U.S. and Canadian governments began promoting the development of large export-oriented agriculture industries based on only a few crops and livestock species.

Scientific advances in the 1970s and ’80s heralded a new era in agriculture. To boost flat sales, Monsanto and other agrichemical companies ventured into genetic engineering and transformed themselves into the biotechnology industry.

They bought out traditional seed companies and engineered their herbicide-resistant genes into the newly acquired seed lines.”  It’s been all downhill from there…

In a comparison of seeds offered in commercial seed houses in the early 1900s to the seeds found in the National Seed Storage Laboratory in 1983, researchers found 93 percent of seeds were lost over eight decades.

The National Geographic infographic below shows just how many varieties of fruits and vegetables appear near extinction.3  Even more concerning is the fact that the data is already more than 30 years old, and the problem may have gotten even worse since.

For the record, it’s not only fruits and vegetables that are disappearing. The Millennium Seed Bank Partnership estimates that 60,000 to 100,000 plant species are in danger of extinction.4 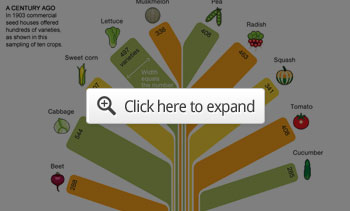 Loss of Seed Diversity Coincides with the Consolidation of Seed Companies

Seeds have traditionally been saved and shared between farmers from one harvest season to the next. Farmers rarely ever had to buy new seed. Nature, when left alone, provides you with the means to propagate the next harvest in a never-ending cycle.

Now, however, farmers relying on patented seeds must buy them each year from pesticide companies like Monsanto. Saving such seeds is illegal because it is considered to be patent infringement.

Many farmers depend on Monsanto’s genetically modified (GM) (and patented) seeds. More than 90 percent of US soybeans and 80 percent of corn acreage is planted with Monsanto’s patented GM seeds.5

For 200 years, the patenting of life was prohibited, especially with respect to foods. But all of that changed in 1978 with the first patent of a living organism, an oil-eating microbe, which opened the proverbial floodgates.

Patenting of life forms was never approved by Congress or the American public. But as far the GMO industry is concerned, they own a gene, wherever it ends up.

According to the Organic Consumers Association (OCA), as of August 2013 Monsanto owned 1,676 seed, plant, and other similar patents.6 This was the plan all along. As reported by Friends of the Earth International:7

“At a biotech industry conference in January 1999, a representative from Arthur Anderson, LLP explained how they had helped Monsanto design their strategic plan. First, his team asked Monsanto executives what their ideal future looked like in 15 to 20 years.

The executives described a world with 100 percent of all commercial seeds genetically modified and patented. Anderson consultants then worked backwards from that goal, and developed the strategy and tactics to achieve it.

They presented Monsanto with the steps and procedures needed to obtain a place of industry dominance in a world in which natural seeds were virtually extinct.”

In 1996, there were still about 300 independent seeds companies left in the US. By 2009, there were fewer than 100.8 With the rise of GM crops and seed patents, meanwhile, the pesticide industry has been snapping up an ever-growing share of the seed industry.

“The commercial seed industry has undergone tremendous consolidation in the last 40 years as transnational corporations entered this agricultural sector, and acquired or merged with competing firms.

This trend is associated with impacts that constrain the opportunities for renewable agriculture, such as reductions in seed lines and a declining prevalence of seed saving.”

He further stated,“[t]he Big Six chemical/seed companies [Monsanto, Bayer, Dow, Syngenta, DuPont and BASF] have increased their cross-licensing agreements to share genetically engineered traits, strengthening the barriers to entry for smaller firms that don’t have access to these expensive technologies.”11

Howard has also compiled the graphic below, which depicts changes in ownership involving major seed companies and their subsidiaries from 1996 to 2013.12

As for seed costs, prices for GM soybean seeds rose 325 percent from 1995 to 2011, with GM soybean seed costing about 47 percent more than non-GM soy.13 GM corn seed is also about double that of conventional seed, and according to the Center for Food Safety:14 “In addition to the cost of seeds, a ‘trait fee’ is charged—this fee has also precipitously risen from $4.5[0] per bag of soybean seed in 1996 to an estimated $17.50 by 2008.”

As the Worldwatch Institute reported:15 “With the profitability of seed increasing over the last 15 years, largely because of patents and contracts, the money and incentive for public institutions to develop new varieties are declining. Farmers also are saving less seed.” 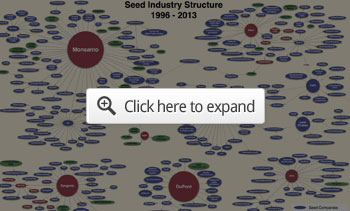 The Cumberland County Library System in Pennsylvania set up a “seed library” at Mechanicsburg’s Joseph T. Simpson Public Library last year. Locals could borrow heirloom seeds for the growing season and then replace them at the end of the year. The library thought the system would encourage “residents to learn more about growing their own food and acquiring self-sufficiency skills.”16

All was well in the community… until the US Department of Agriculture (USDA) sent a letter telling them they were violating the 2004 Seed Act, which regulates the selling of seeds. For good measure, the USDA also sent in a high-ranking official and lawyers to meet with the library. As Global Research reported, the USDA was only doing their job, stopping possible “agri-terrorism” at the hands of community residents planting heirloom tomatoes…17

“Feds told the library system that they would have to test each individual seed packet in order for the facility to continue, an impossible task, which meant that the seed library was shut down. Cumberland County Library System Executive Director Jonelle Darr was told that the USDA would, ‘continue to crack down on seed libraries that have established themselves in the state.’

Cumberland County Commissioner Barbara Cross applauded the USDA’s decision, warning that allowing residents to borrow seeds could have led to acts of ‘agri-terrorism.’…While the USDA is busy cracking down on local seed libraries in the name of preventing cross-pollination, many accuse the federal agency of being completely in the pocket of biotech giant Monsanto, which itself has been responsible for cross-pollinating farmers’ crops with genetically modified seeds on an industrial scale.”18

In reality, “old-fashioned” seed swaps such as the one attempted at the Joseph T. Simpson Public Library are one of the best ways to secure non-GMO, heirloom seeds for your garden. You can try this on your own with friends and neighbors or local gardening clubs. The National Gardening Association, for instance, has an online seed swap that allows you to post either seeds you’d like to share or seeds you’re looking for. It’s a free service and, as they say on their site, “one gardener’s extras are another’s treasures.”19 If you’re interested in learning more, keep an eye out for the film “Seed: The Untold Story,” which is slated to be released in 2015.

Voting with your pocketbook, at every meal, matters. It makes a huge difference and can help to protect the future integrity of our food supply. Along those lines, here are seven ways you can take power back from the corporate bullies that are trying to control the food supply: