Over 90 percent of US-consumed shrimp come from industrial shrimp farms off the coasts of Thailand, Vietnam, Ecuador, and other countries, which are plagued with the same problems as land-based confined animal feeding operations (CAFOs)

Shrimp  tops the list as America’s favorite seafood,1 but if you think that  shrimp is being harvested off US shores and brought, fresh, into market –  Forrest Gump style – you’re being misled.

“American shrimpers are a  dying breed these days because they can’t compete with cheap, foreign imports,” Food & Water Watch  reported.2

Today,  the vast majority of shrimp (over 90 percent) come from industrial shrimp farms  off the coasts of Thailand, Vietnam, Ecuador, and other countries, which are  plagued with the same problems as land-based confined animal feeding operations  (CAFOs).

“Chances are, the delicious shrimp  cocktail you’re splurging on is loaded with antibiotics and chemicals because  that‚ what goes into the cramped, dirty ponds made to mass-produce shrimp.  Doesn’t sound yummy, does it?” Food & Water Watch states…3

What’s more, what you see on the label isn’t always what you  get, as many shrimp products are mislabeled and completely misrepresented.

30% of Shrimp Products Are Misrepresented

The  ocean conservation group Oceana tested 143 shrimp products from 111 US grocery  stores and restaurants. Their DNA tests showed that 30 percent of shrimp  products are misrepresented and 15 percent were mislabeled in regard to  production method (farm-raised or wild-caught) or species.

Among  the unsettling findings, farmed species were often labeled as “Gulf shrimp,”  species were often mislabeled (or mixed together in one bag), and there was  even a type of shrimp that’s an aquarium pet (not intended for consumption) in  a bag of frozen shrimp salad!4 Of the 20 shrimp species  identified, 40 percent were not previously known to be sold in the US.

The  mislabeled shrimp were sold at both national and regional supermarkets (as well  as smaller grocery stores), chain restaurants, and even high-end eateries. About  30 percent of the samples also lacked any labeling on country of origin and 29  percent didn’t state whether the shrimp was farm-raised or wild.

Ironically,  if you’re looking for wild-caught shrimp, you may be best off purchasing  products labeled simply as “shrimp,” as two-thirds of such packages contained  wild-caught Gulf shrimp, while more than one-third of those labeled as “Gulf  shrimp” were actually farm-raised! According to Oceana:5

“…consumers are often provided with  little information about the shrimp they purchase, including where and how it  was caught or farmed, making it difficult, if not impossible, for them to make  informed choices.”

In  Oceana’s infographic below,6 you can see where shrimp  products were most likely to be misrepresented. While each area tested had  problems, New York fared the worst, followed by Washington D.C. 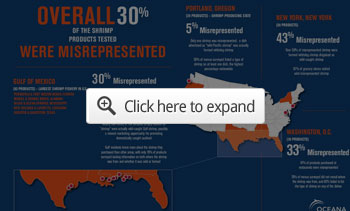 It’s Not Only Shrimp That’s ‘Fishy’

Seafood  misrepresentation, mislabeling, and fraud are rampant, and it’s not only shrimp  that you should be wary of. Last year, Oceana collected more than 1,200  seafood samples from 674 retail outlets in 21 states, which were then  genetically tested to determine if they were honestly labeled.

As it turned  out, the vast majority of the fish were not at all what they were claimed to be…  Overall, a full one-third (33 percent) of the fish  samples were mislabeled — substituted for cheaper, less desirable, and/or more  readily available fish varieties.7 The results showed:

According to  Oceana,8 more than 90 percent of the seafood consumed in the US is imported, yet only 1 percent of imports are inspected for  fraud, which may explain this clearly out-of-control situation. To put is simply, no one is minding the store…

“Our  findings demonstrate that a comprehensive and transparent traceability system –  one that tracks fish from boat to plate – must be established at the national  level.

At  the same time, increased inspection and testing of our seafood, specifically  for mislabeling, and stronger federal and state enforcement of existing laws  combatting fraud are needed to reverse these disturbing trends.

Our  government has a responsibility to provide more information about the fish sold  in the U.S., as seafood fraud harms not only consumers’ wallets, but also every  honest vendor and fisherman cheated in the process – to say nothing of the  health of our oceans.”

As you might suspect, some of the largest seafood vendors  are those who want to continue keeping you in the dark about what type of  seafood you’re actually eating. As Jerald Horst, a seafood writer and former  state fisheries specialist told the New  York Times:9

“There’s a lot  of pressure from the major institutions for them [the government] not to do it  [enforce proper labeling]… They want the freedom to do ‘creative marketing.’”

It’s Important to Know Where  Your Seafood Comes from

Fish has always been the best source for the animal-based  omega-3 fats EPA and DHA, but as levels of pollution have increased, this health  treasure of a food has become less and less viable as a primary source of  beneficial fats.

Most major waterways in the world are contaminated with  mercury, heavy metals, and chemicals like dioxins, PCBs, and other agricultural  chemicals that wind up in the environment.

This is why, as a general rule, I recommend limiting your consumption of fish.

However, I do make certain exceptions depending on species  and location. Generally, the larger the fish the longer it has lived, and the  more time it has had to bioaccumulate toxins like mercury from the ocean. This  is why Bluefin  and Ahi tuna, swordfish, walleye, marlin, king  mackerel, orange roughy, and shark, which are all long-lived fish at the top of  the food chain, should not be consumed.

Farm-raised  seafood should also be avoided. It is more likely to contain  contaminants, including not only pollutants but also antibiotics, pesticides,  and other chemicals used during “farming.” It’s also detrimental to the  environment, as farmed fish may spread disease to wild fish, and concentrated  fish waste and uneaten feed further litter the sea floor beneath these farms,  generating bacteria that consume oxygen vital to shellfish and other  bottom-dwelling sea creatures. Farmed fish waste promotes algal growth that  that harms the water’s oxygen content, posing risks to coral reefs and other  aquatic life.

As  for which types of seafood I still recommend, one is authentic, wild-caught Alaskan  sockeye salmon,  the nutritional benefits of which I believe still outweigh any potential  contamination. The risk of sockeye accumulating high amounts of mercury and  other toxins is reduced because of its short life cycle, which is only about  three years. Additionally, bioaccumulation of toxins is also reduced by the fact  that it doesn’t feed on other, already contaminated, fish.

The second exception is smaller fish  with short lifecycles, which also tend to be better alternatives in terms of  fat content, so it’s a win-win situation — lower contamination risk and higher  nutritional value. A general guideline is that the closer to the bottom of the  food chain the fish is, the less contamination it will have accumulated  (assuming it is wild-caught and not farm-raised). So if you’re a seafood lover,  try to choose most of your fish from this group, which includes:

As an added precaution, whenever I eat  fish I make sure to also take chlorella tablets. The chlorella is a potent  mercury binder and if taken with the fish will help bind the mercury before you  are able to absorb it, so it can be safely excreted in your stool.

How to Avoid Getting Scammed When Purchasing Seafood

Just  as you can seek out locally produced eggs, meat, and produce, you can seek out  local seafood. This is more challenging if you don’t live near the coast. However,  many inland areas do have seafood markets that are dedicated to finding fresh,  high-quality seafood that is brought in daily. Talk to the owner directly, who  should be able to give you details about where the seafood comes from and how  it is produced. Another alternative is to look for seafood that bears the  following labels, which signify more sustainable products:

In  addition, Oceana  offers the following tips for protecting yourself against rampant seafood  fraud:10