That could be one just one of many conclusions drawn by a recent Department of Defense study that found the Navy earned the dubious honor of surpassing all other branches in its rate of obese personnel.

The overall rate of fat service members is also up from recent years, with the percentage of personnel weighing in at obese standards climbing to over 17 percent, according to a Health of the DoD Force study.

That number spiked to over a quarter of service members over the age of 35.

For the Navy, the overall number of obese personnel was a shocking 22 percent. The other branches reported the following frequency of obesity: And while the Marine Corps was the least overweight of the bunch — a characteristic partially attributable to the Corps having the youngest average age of personnel — the Marines reported the highest rate of knee and back injuries.

The Navy, meanwhile, reported the lowest incidence rate of cumulative injuries. How much of that could be related to inactivity was not determined. “This report highlights obesity as a growing health concern among Sailors,” the study’s authors commented about their findings, which were first reported by Stars and Stripes.

“The Department of Defense, our nation’s largest employer, spends about $1.5 billion annually in obesity-related health care costs for current and former service members and their families, as well as costs to replace unfit personnel,” a recent study by the Centers for Disease Control and Prevention claimed. 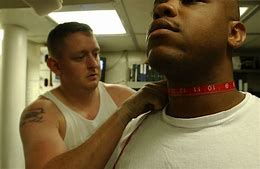 “In the civilian world, unfit or overweight employees can impact the bottom line,” retired Air Force Gen. Richard E. Hawley said in the CDC study. “But in our line of work, lives are on the line and our national security is at stake.

The civilian world is one in which, as of 2015, one in three young adults are considered too fat to enlist, contributing to a difficult-to-navigate environment for recruiters in finding suitable candidates for military service.

A 2018 RAND Report that analyzed rates of both obese and overweight troops painted a grim picture of the military’s physical fitness standards.

The study, featuring roughly 18,000 randomly selected participants across each of the service branches, reported that almost 66 percent of service members are considered to be either overweight or obese, based on the same BMI measurement standard used in the DoD study.

Broken down by service, the 2018 report lists the Army as the branch accounting for the highest percentage of overweight troops, with 69.4 percent of soldiers falling under this category.

“If we don’t take steps now to build a strong, healthy foundation for our young people, then it will not just be our military that pays the price,” retired Rear Adm. Richard R. Jeffries said in the CDC study.

“Our nation as a whole will suffer also.”