It is one of the “most extreme” examples of regeneration ever seen. 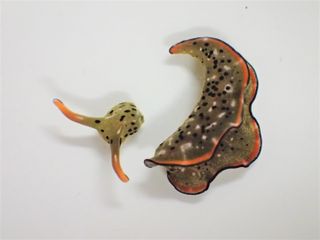 This image shows the head and the body of Elysia cf. marginata, a day after autotomy. (Image credit: Sayaka Mitoh)

Two species of sea slugs can pop off their heads and regrow their entire bodies from the noggin down, scientists in Japan recently discovered. This incredible feat of regeneration can be achieved in just a couple of weeks and is absolutely mind-blowing.

Most cases of animal regeneration — replacing damaged or lost body parts with an identical replacement — occur when arms, legs or tails are lost to predators and must be regrown. But these sea slugs, which belong to a group called sacoglossans, can take it to the next level by regrowing an entirely new body from just their heads, which they seem to be able to detach from their original bodies on purpose.

If that wasn’t strange enough, the slugs’ heads can survive autonomously for weeks thanks in part to their unusual ability to photosynthesize like plants, which they hijack from the algae they eat. And if that’s still not enough in the bizarro realm, the original decapitated body can also go on living for days or even months without their heads.

“We believe that this is the most extreme form of autonomy and regeneration in nature,” lead author Sayaka Mitoh, a doctoral student at Nara Women’s University in Japan, told Live Science.

Further investigations revealed that another species of sacoglossan sea slug (Elysia atroviridis) also undergoes this type of regeneration and that certain individuals can pull off the trick more than once.

How to grow a brand-new body

Mitoh first stumbled across this bizarre behavior by accident when she spotted the detached head of a sacoglossan sea slug (Elysia cf. marginata) circling its detached body in a tank at the Yusa Lab at Nara Women’s University in 2018.

“One day, I found an individual of Elysia cf. marginata with its head and its body separated,” Mitoh said. “I thought the poor slug would die soon.”

But instead of dying, the wound at the back of the slug’s head quickly healed and was replaced by the beginnings of an entirely new body.

“After a few days, the head started regenerating the body and I could see [the] beating of the heart. It was unbelievable,” Mitoh told Live Science. “I was really happy and relieved when I found it could regenerate the body.”

After around three weeks, the slug had finished its body-swapping stunt and replaced the 80% of its body it had originally lost, including all the vital organs it had been able to live without for so long, according to Mitoh.

The slug’s brand-new body was a perfect replica of the original, which researchers found was also doing reasonably well on it’s own.

“The [original] body continues to move and live for days to months,” Mitoh said. “You can see the heart beating” inside them, she added. However, the decapitated bodies did not appear to be capable of growing new heads themselves.

Exactly how the slugs regenerate their bodies from the head down is still unknown, but the researchers suspect stem cells — special undifferentiated cells that have the potential to be turned into any type of cell — play an important role.

“We think that some multipotent [stem] cells may be involved in the regeneration process,” Mitoh said. In the future, she and her team hope to “further explore the mechanisms underlying this phenomenon at the tissue and cellular levels,” she added.

The scientists are also not sure how the sea slugs sever their heads from their bodies in the first place or why they would want to, especially when there is no visible reason to discard their old bodies and start again.

A leading theory is that the slugs do it to remove internal parasites that have infested their old bodies. However, it may also just be a way to survive attacks from predators by sacrificing their bodies and escaping as autonomous heads and could have been triggered by something else in the lab, Mitoh said.

However, the researchers found that only the younger slugs are capable of autonomy and regeneration. When older slugs had their heads removed, the heads survived for up to 10 days but they never started eating and did not start to regenerate before dying.

“We think that very old ones gain little merit from autotomy, as they probably cannot reproduce,” Mitoh said.

Although one individual in the study underwent autonomy and regeneration twice, the researchers suspect that this is probably the limit and that after a certain stage in their lives the slugs probably lose the ability altogether.

You are what you eat

The regeneration process requires a lot of energy, which is challenging for an autonomous head to acquire, Mitoh said.

However, the sacoglossans have a secret weapon: These particular slugs are capable of kleptoplasty, or the ability to steal chloroplasts — the parts of a cell that allow plants to convert sunlight into energy via photosynthesis — from the algae they eat and use them in their own tissues. This allows the slugs to photosynthesize, which gives them enough energy to start the regeneration process.

“They rely on photosynthesis just after autotomy and when food is scarce,” Mitoh said. “But the stolen chloroplasts last only for several days for these sea slug species, and so they probably need to eat to complete regeneration.”

Mitoh and her colleagues will look for other species of sacoglossan that can regenerate in this way.

“Sacoglossan sea slugs are well known for their ability for kleptoplasty, and we now learned that they have another great ability,” Mitoh said. “We are very interested in these small animals.”