The research “debunks the modern image of Vikings.” 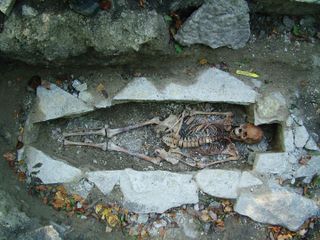 Researchers sequenced the DNA from more than 400 Viking remains including from this female skeleton named Kata discovered in a Viking burial site in Varnhem, Sweden.
(Image: © Västergötlands Museum)

Those ferocious seafaring warriors that explored, raided and traded across Europe from the late eighth to the early 11th centuries, known as the Vikings, are typically thought of as blonde Scandinavians. But Vikings may have a more diverse history: They carried genes from Southern Europe and Asia, a new study suggests.

“We didn’t know genetically what they actually looked like until now,” senior author Eske Willerslev, a fellow of St. John’s College of the University of Cambridge, and director of The Lundbeck Foundation GeoGenetics Centre at the University of Copenhagen in Denmark, said in a statement. The research “debunks the modern image of Vikings.”

For the study, which took six years to complete, an international group of researchers analyzed the DNA taken from the remains — such as the teeth and bones — of 442 people who lived sometime between about 2400 B.C. to A.D.1600 found in archaeological sites across Europe and Greenland. These people lived, for the most part, during the Viking Age, which lasted from about A.D. 750 to A.D. 1050. The researchers then compared these ancient people’s DNA with already published DNA sequences from 3,855 modern-day individuals and from 1,118 other ancient individuals.

This sweeping gene analysis suggested that the Vikings weren’t just the continuation of Iron Age groups who lived from about 500 B.C. to about A.D. 700 in Scandinavia before the Viking Age. Rather, the Vikings and their ancestors would have intermingled often with people from Asia and Southern Europe. Many Viking individuals had “high levels of non-Scandinavian ancestry,” the authors wrote in the paper.

“No one could have predicted these significant gene flows into Scandinavia from Southern Europe and Asia happened before and during the Viking Age,” Willerslev said. They also found that many Vikings had brown hair, not blonde blond hair as typically imagined, according to the statement.

The researchers found genetic differences among different Viking populations within Scandinavia, which suggests that Viking groups were much more isolated from each other than previously thought, Willerslev said. The coastal communities had high genetic diversity — likely due to more trading and spread of people — than communities in the heartland of Scandinavia, the authors wrote.

What’s more, by comparing ancient genes to modern-day genes, the researchers were able to confirm ideas about how the Vikings moved out of Scandinavia to raid and trade. Vikings from present-day Denmark typically went to England; Vikings from Sweden went mostly east to the Baltic region; and Vikings from Norway traveled to Ireland, Iceland, Greenland and the Isle of Man.
RELATED

Their finds also revealed unique cultural tidbits. A boat burial in Estonia may have been the earliest evidence of a Viking voyage, according to the paper. It’s not clear if this expedition was a raid or a “diplomatic” expedition; but the burial, made up of two boats, contained the remains of 41 men from modern-day Sweden who died violently and were buried with “high-status” weaponry. Among the burial remains were four brothers and a relative, which suggested raiding may have been a family or local activity, according to the statement. Others in the burial had similar genes, suggesting they came from the same local spot in what is now Sweden.

And it turns out, not every person treated as a Viking was genetically a Viking. In Orkney, Scotland, the researchers found two male skeletons in a Viking burial site. They were buried with swords and other Viking items, but they weren’t actually Vikings, but rather genetically similar to modern-day Irish and Scottish people.