A woman developed a mottled rash all over her body (A), which doctors learned was caused by her red blood cells clumping together (C, left vial) and ultimately perishing (B) due to a rare condition called cold agglutinin disease. 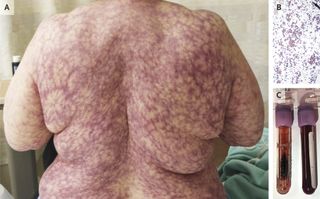 Cold winter temperatures are uncomfortable for most, but for one New York woman, frigid weather triggered a rare immune condition, according to a new report of the case.

The 70-year-old woman lived in upstate New York, which is known for its cold and snowy winters. She went to the doctor after she began feeling dizzy and developed an unusual, spidery purple rash across her entire body, according to the case, published today (Sept. 25) in the New England Journal of Medicine.  She told doctors that two weeks earlier, she had developed symptoms of a viral respiratory infection, the report said.

Doctors noted that her giant rash appeared to be due to a skin problem called livedo reticularis, which is thought to be caused by spastic blood vessels or abnormal circulation just beneath the skin, according to the Mayo Clinic.

But blood samples drawn from the patient revealed that there was much more to her story, as doctors from the Bassett Medical Center in Cooperstown, New York, explained in the report. Rather than appearing a solid red color, the woman’s blood ran nearly clear with great crimson clumps floating through the fluid. The patient’s red blood cells, which carry oxygen and grant blood its cardinal hue, had spontaneously stuck together.

Normally, antibodies within the blood and lymph fluid seek out and destroy invading pathogens, such as viruses and bacteria. In people with cold agglutinin disease, low temperatures trigger these antibodies to  bond with red blood cells instead. The captured cells pile up in chunky clumps, a process known as agglutination, which eventually kills the cells and leaves people deprived of much-needed blood oxygen. In this case, both the patient’s recent infection and the cold New York weather — which was around 15 degrees Fahrenheit (minus 9 degrees Celsius) when she developed her symptoms  — may have exacerbated her condition, the physicians reported.

The medical team warmed the woman and treated her with blood transfusions and the cancer medication rituximab, which can also be used to treat certain autoimmune conditions, according to the NIH. After a week of treatment, the patient’s ratio of red blood cells to total blood volume more than doubled, an indication that her anemia had disappeared, and her dizziness subsided, though her mottled rash still remained when she was discharged from the hospital.
Source for Story:
https://www.livescience.com/cold-clumps-womans-blood.html?utm_source=ls-newsletter&utm_medium=email&utm_campaign=20190926-ls
Translate »